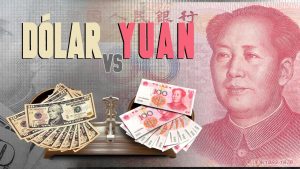 In a first since 1994, the U.S. Treasury Department declared China a “currency manipulator” — after the country let the yuan to fall to its lowest level against the dollar since 2008. China also confirmed that it is suspending purchases of U.S. agricultural products, as a response to President Trump’s new 10% tariffs on another $300 billion worth of Chinese goods. U.S. equities were dealt a blow, with the Dow Jones Industrial Average closing down 760 points on Monday, its worst day this year.

This is no repeat of the 2015 China devaluation crisis. But a weak yuan still spells pain for the already-struggling world economy, and so for investors.

United States Treasuries posted their juiciest weekly return last week, led by the long-end with a near 4% gain after Trump’s threat of more tariffs on China touched off a massive stock market sell-off. Treasuries’ winning streak continued on Monday as China let the yen weakened to 7 to a dollar and state media said local firms suspended buying U.S. agricultural goods. Ten-year yields hit their lowest since Nov. 9, 2016. Since the Fed’s first rate cut in over a decade last week, 10-year yields have fallen 33 basis points.

The surprise tariff announcement came after the U.S. and China restarted trade talks in Shanghai this week, the first in-person trade talks since a G-20 truce.

There is an opportunity for the US to increase trade with its most immediate neighbors, especially Mexico and Latin America. This in turn may positively impact their economies and quality of life to the point there isn’t this mass migration to the North.

Aside from trade, we seriously need to curb our care-less consumption. We’ve become a society of throw-away consumerism hell-bent on instant gratification. It’s hitting us in the bank account, as well as the environment.

Chinese purchase of U.S. agricultural products remains a big sticking point in the trade conflict. Trump claimed Thursday China agreed to buy “in large quantities, but did not do so.”

Well, that escalated quickly.Trade war is causing the global equity markets to fall. The CNY Chinese Yuan depreciated to below a critical 1 dollar to 7 Renminbi level.

The only weapon China has in trade war is their currency via “manipulative devaluation”. China is hitting back at President Trump to make purchasing their goods look a little bit attractive. Companies are anticipating longer term trade tensions affecting the economics behind operating a Chinese factory and regardless of currency moves, firms that manufacture goods in China are spooked and beginning to move facilities to other south eastern Asian countries to circumvent tariffs.

The actions taken by Trump are long overdue and should’ve been taken by the three previous administrations. China has continually abused our goodwill by not opening their market to the extent we have opened ours, forced technology transfer of US companies as a requirement when working with a Chinese ‘partner’ (most significant Chinese businesses are state-owned, and if not, coerced forcibly into acting on behalf of the state), disregard for intellectual property rights, theft of trade secrets, economic/cyber-espionage (Intel, Apple, Dow Chemical have been the subject of such invasiveness, to name a few), currency manipulation, the list goes on.

Not to mention, the Federal Reserve can only do so much. Accommodating monetary policy is losing effectiveness and has been anticipated by the market. Investors anticipated the rate cut would create a “risk on” mood for equities and with the move below 3000 on the S&P 500 a risk off mood is prevalent.

The best game in town remains fixed income with longer duration, as investors are gaining market value while interest rate expectations race towards 0%.

It will be a crazy second half of 2019, buckle up and go long short duration fixed income waiting for opportunities.

Not to get too much into politics but … The president wanted a big Fed cut yesterday but didn’t get one. The Fed has stated trade uncertainty is one reason to cut more. So today we have new tariffs. Perhaps this is his way to force the Fed’s hand.