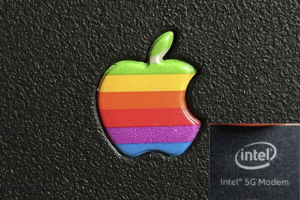 It is considered as one of the most inevitable deal that has finally gone through in recent times. Technology Giant Apple has acquired the smartphone modem business of Intel for $1 billion.

As a part of this strategic deal, around 2,200 Intel employees will be transferred to Apple, along with intellectual property like patents and equipment. According to the official statement, the transaction is expected to close in the fourth quarter of 2019, subject to the approvals from the regulating bodies.

With the current acquisition, Apple has strike a gold mine with gaining of 17,000 wireless technology patents, ranging from protocols for cellular standards to modem architecture and modem operation. However, Intel will still continue to manufacture modems for non-smartphone devices, like computers, Internet of Things devices as well as self-driving vehicles.

Forget iPhones or MacBooks, ‘Apple Shoes’ up for sale at 15,000 Dollars

However, Apple recently has migrated to Qualcomm for its 5G modems in its next generation iPhones, signing a 6-year patent agreement, after Intel couldn’t deliver 5G modems in time to deliver in the markets. Apple will continue using Qualcomm modems while building its own with the newly acquired team.

Intel CEO Bob Swan, said in a statement, “This agreement enables us to focus on developing technology for the 5G network while retaining critical intellectual property and modem technology that our team has created.”

He further added, “We have long respected Apple and we’re confident they provide the right environment for this talented team and these important assets moving forward. We’re looking forward to putting our full effort into 5G where it most closely aligns with the needs of our global customer base, including network operators, telecommunications equipment manufacturers and cloud service providers.”

So as i understand the main strategy of Apple is to have even more dominance over the manufacturing its devices. We’ve seen what Apple has done with its A-series of CPUs on the iPhones and iPad Pro. The performance and quality on them has proved to be one of the best in the industry. We would love to see what it plans to do with the 5G connectivity and next generation Technologies.