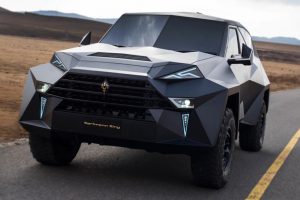 Imagine that if you are a billionaire and really great passion for SUVs. But on the similar side you are hunting for something elegant and exclusive, something in the elite league of the Lamborghini Urus or even beyond! Well, then your hunt is finally over and should turn your eyes at the Karlmann King, the world’s most expensive SUV ever built!

It has been designed by a Chinese company called IAT and was built by a European team which comprises of over an expert team of 1,800 people. The company says that it will build precisely 12 units of the Karlmann King but we do not know if all the models have already been booked or sold until yet. It was first showcased at the Dubai International Motor Show in 2017.

The Karlmann King has a giant 6.8-litre V10 engine producing 360bhp with a top speed of 87 miles per hour. The vehicle weighs around five tonnes.

The SUV is built on a Ford F-550 platform and weighs approximately around 4,500 kg. Have you dreamed of your SUV to be bullet-proof; the weight can go up to a massive 6,000 kg. It is almost six meters in length. Under the hood is a massive 6.8-litre V10, from the Ford F-550 itself. The engine churns out close to 400 bhp, a little less for something that weighs 4.5 tonnes. This explains the lowly top speed of just 140 kmph!

The interior cabin looks like a luxury 5-star hotel room and has retractable HDTV wired to Apple TV and a PlayStation 4, a mini fridge, a small valuable safe vault, pop-up dining tables, and even a Nespresso machine.

As far as specifications and features go, the Karlmann King gets Hi-Fi sound, ultra HD 4K television set, private vault, phone projection system and optional satellite TV along with optional facility of satellite phone on board. Additionally you have magnificent features such as a coffee vending machine, electric table, independent Air Conditioner at the front and rear seating, indoor neon light control and so on. All the creature comfort features can be controlled via a smartphone application. The wheelbase of the car is a massive 3691 mm, which means there is more than enough room for a tea party inside. The edgy exterior has been built in carbon-fibre and steel.

Coming to the price of the Karlmann King, the prices start at 1.56 million pound sterling, which roughly translates to ₹ 14.33 crore. At that price, there are only a handful of people who could afford the Karmann King.