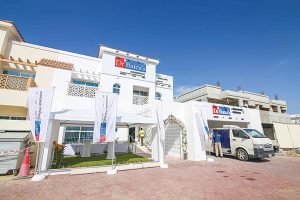 Dr Batra’s Multi-Specialty Homeopathy is the world’s largest chain of homoeopathic clinics in the world with a network of over 225 super-specialty clinics spread across 133 cities in India, United Kingdom, United Arab Emirates, Bahrain and Bangladesh.

Currently Dr Batra’s has successfully catered to more than 1.5 million patients with a success rate of 91% as authenticated by American Quality Assessors. Today, Dr Batra’s Multi-Specialty Homeopathy is the world’s largest chain of homoeopathic clinics with a wide range of network of over 225 super-specialty clinics spread across 133 cities in India, United Kingdom, United Arab Emirates, Bahrain and Bangladesh.

Commenting on the launch of the 10th international clinic, Dr Mukesh Batra, Padma Shri recipient and Chairman Emeritus, Dr Batra’s Group of Companies, said, “We have seen a steady rise in the demand for homoeopathy internationally in the past few years. With more patients looking for holistic healthcare options, we are delighted to announce our foray into Abu Dhabi, which takes our total clinic count to six in UAE.”

Commenting on the brand’s expansion plans into the region, he further added, “We are currently located in 5 countries and have 10 international clinics including the UK including a clinic in Harley Street; Dubai including a clinic at the Dubai Health Care City (DHCC); in Bahrain including a clinic at the KIIMS Bahrain Medical Center (KBMC); in Bangladesh – Dhaka; and now Abu Dhabi. With Homeopathy present in over 80 countries globally to meet the demand for homoeopathy, we plan to bring Dr Batra’s clinics to Saudi Arabia, Qatar, Malaysia, Singapore, Canada, USA, France and Australia.”

Homoeopathy is considered as the 2nd largest form of medicine and therapies in the world, according to World Health Organisation, is practiced in 86 countries and is consumed by over 200 million people the world over. According to the Market Research Future report, the global homoeopathy market is expected to reach USD 31459.6 million by 2023 at a Compound Annual Growth Rate of 14.60%. It is practiced in 86 countries.

Homoeopathy also enjoys royal patronage in the United Kingdom. The British Royal Family has been under homoeopathic care since 1980. According to Global TGI Barometer, about 6-9 million people in the UK prefer to use homoeopathy. Furthermore, 42 per cent of British physicians refers patients to their homoeopathic counterparts [British Medical Journal].

There are lots of benefits that homoeopathy offers to patients. First is that it offers holistic treatment, which means it treats a person as a whole and not only on the basis of external symptoms. The other benefit is that homoeopathy is safe and treats naturally means there is no side effects. Apart from these advantages, what makes it diverse from other forms of medicine is that it is cost-effective, non-invasive and painless.

Dr Batra’s commenced its operations in the Gulf region with its first clinic in Dubai at the most renowned International Healthcare Project DHCC eight years ago. Dr Batra’s DHCC clinic was awarded the Best Newcomer Facility Provider of 2009, for Excellence in Informatics, Data Submission and Compliance of Requirements, by the Department of Health Informatics, UAE. Dr Batra’s Dubai website also won the Golden Award in the healthcare category by United Arab Emirates Excellence Awards Academy.