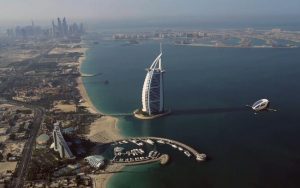 The Dubai Roads and Transport Authority announced at the World Government Summit last week that the city would start operating drone taxis along predetermined routes from this summer. This human-size drone, EHang 184, is made in China. EHang 184 has enough capacity for a small luggage and will be automatically controlled through 4G mobile Internet. It has already flown in Dubai which can easily transport a single passenger who weighs less than 220 pounds over short distances at 62 miles per hour with a fully-charged battery.

The passenger drone has a “fail-safe system” and “if any components malfunction or disconnect, the aircraft will immediately land in the nearest possible area to ensure safety,” Chinese drone company Ehang, showed off these unique and autonomus Mega Drone EHang 184 at this year’s CES in Las Vegas after 100 successful manned test flights.
We want to hear from you. Please give your comments, feedback and advices about this Mega Drone and also you would be willing to try out this flying drone for a ride this July.