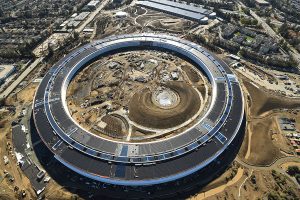 Apple Park is was the last dream project from co-founder Steve Jobs, who died Oct. 5, 2011 due topancreatic cancer.Apple has officially announced that its new $5 billion (£4 billion) campus will be open to employees from April. Steve Jobs, who would have turned 62 on February 24, had a dream of these type of  facility as a centre for creativity and collaboration.

The Silicon Valley tech giant said that it will take over six months to move more than 12,000 staff to the new campus, which is set on a 175-acre site. The campus’ 2.8 million-square-foot main building is built entirely in the world’s largest panels of curved glass. It is located in the heart of Santa Clara Valley in California.

Steve jobs dream was to make biggest nature friendly Information Technology park which includes 9,000 trees and two miles of paths for workers, as well as an orchard, meadow and pond. Employees can work out in a 100,000-square-foot gym or use the outdoor paths for walking and running.

1).  A visitor’s center with an Apple Store and a cafe that’s open to the public
2). A 100,000 sq ft fitness center
3). Well secured advanced research and development facilities
4). Gymnasium with two miles of walking and running tracks in outdoor.
5). A 17-megawatt rooftop solar installation on the site will be “one of the largest” on the globe,
6). Apple’s new campus to be ‘greenest’ on Earth