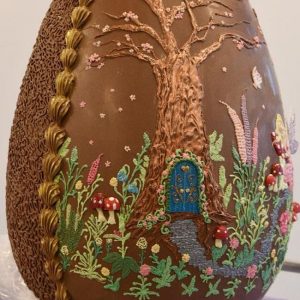 Chocolate Lovers at Cadbury World in the United Kingdom are after creating a special fairyland-themed egg as part of the attraction’s seasonal celebrations.

Cadbury World has surprisingly revealed a 38 kg Easter egg that is just equal to 844 bars of Dairy Milk.

The Birmingham-based chocolate maker have given a 2.5ft tall egg their best designed and produced a special fairyland-themed treat as part of the attraction’s seasonal celebrations.

The intricate egg has a solid chocolate shell, which is 4 centimeter thick. The spectacular one-off design features an array of flowers, fairies and a blossom tree, which have been carefully hand-piped directly onto the egg. A collection of toadstools, fairy wings and a magical door leading into the tree were then fixed to the egg using melted white chocolate for a stunning 3D effect, its no wonder it took them a full two days to make it.

Diane Mitchell, Marketing Manager at Cadbury World, said: “Our artistic chocolatiers are renowned for making magnificent creations to mark a variety of special occasions, and this latest masterpiece demonstrates their creativity and world class skills.We can’t wait to welcome our visitors to see the giant egg, and enjoy a day out that’s choc-full of fun!”

The Monster Egg will be on public display in Cadbury World in Birmingham until April 28th, We weren’t told about the plans for the egg post-April 28th but we sincerely hope that it will be broken down for some serious feasting!