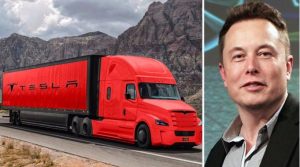 Elon Musk founder of Tesla Motors said in recent interview that they are artup is set to launch its first electric semi truck in September, moving for the first time into that segment.

Elon Musk in his tweet provided few details about the plan and would be unveiled in September. Tesla last year sold 84,000 cars, generating $7 billion in revenue. Tesla, which has overtaken Ford in market capitalization, is on track to begin production in July of the Model 3, which is aimed at the middle market, making the electric car accessible to a broader segments to consumers.

Elon Musk also revealed that Tesla will show off an electric pickup truck in “18 to 24 months,” and that the next Tesla roadster sports car will be a convertible. On the commercial truck side, he notes that major truck makers like Germany’s Daimler are already working on electric-powered trucks. Expert believes that Tesla’s Electric Semi Will Totally Disrupt the Auto Industry