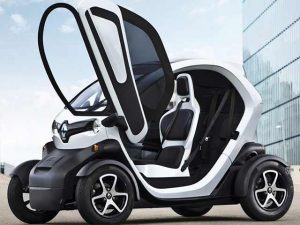 Renault Samsung Twizy which made its debut as a concept car some years ago in 2009 at the Frankfurt Motor Show. It was said that they will produce this eletric car concept in 2011 and after that it sold over 19000 units worldwide.

Twizy the two seater electric car by Renault in collaboration with Samsung was just showcased with an upgraded version ans new look at Seoul Motor Show in 2017. It was launched as a ‘quadricycle’ in Europe, the exterior of the vehicle gives off a Transformer-like vibe. The electric vehicle looks like being made of two separate components that can detach at will, leaving behind a platform with wheels and a bubble-like chamber.

This Tiny electric car Twizy is best used in populated cities where there are big problems of parking because it is just around 2.3 meters long and 1.3 meters wide so can easily get accomodated in small parking spaces.The car is around 2.3 metres long and 1.3 metres wide, and its tiny size ensures it can fit into small parking spaces.Interestingly, those buying the car can opt to go without doors or the automaker offers scissor gull-wing doors. This electric vehicle can travel upto 90 kilo meter if once fully charged and you can boost up the spped of 80 kilo meter per hour.

This Electric tiny monster Twizy requires lithium-ion battery which can be charged at domestic power points in 3.5 hours, but the battery is not included with the purchase and needs to be seperately leased instead with monthly hire cost for the battery start at around Rs 3,600 and go up to around Rs 5,500. The Eelectric Vehicle is priced between Rs 5.5 lakh and Rs 6.25 lakh, based on which of its three models – Expression, Dynamique, or Cargo – one opts for. It is available in two-toned colour collections, with the body colour ranging from Diamond Black, Snow White, Flame Orange and Lagoon Blue. The arches are available in white, black, orange and blue. 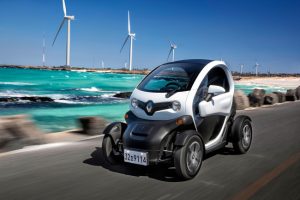