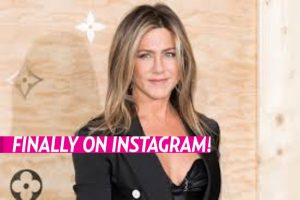 Jennifer Aniston reaches 10 million followers within a day of joining Instagram. What went unnoticed is that it took 3+ decades of work to get there. Numbers matter. Jennifer Aniston created her Instagram account, and she smashed all records: 13.3M subscribers in 2 days and currently 67% engagement rate. She broke Megan Markle and Prince Harry’s record by reaching one million followers in 5h16min, compared to 5h45min for the princely couple.

Almost every person you admire has by far started following Mr. Ratan Tata, who is standing at half a million followers on Instagram without any organic reach with countless decades of hard work and humility. Numbers matter.

The 50-year-old “Friends” star joined Instagram on Tuesday morning. If that wasn’t enough to cause a stir, the first photo she posted from her account was a selfie featuring her fellow costars from the beloved show.

The photo featuring Aniston and her Friends co-stars is exactly the kind of blurry, slightly off-center image any of us would post on the social media platform. “And now we’re Instagram FRIENDS too,” reads the photo caption. Cute. “My friends call me Jen,” says her bio. Clever.

All current age actresses have 25 million+ followers on Instagram, however it is Aishwarya Rai who gets invited to Cannes every year and it was Kareena Kapoor who unveiled the WC trophies: both have put in 2+ decades of work and multiple public failures, however have followers only in single digit millions. Numbers matter.

Regardless of the fact that I’m a major Friends fan, can you just imagine receiving about 270,000 likes and 120,000 followers in less than an hour and then crashing the platform?

This is one of the reasons I love social media, Jennifer Aniston posts a low resolution selfie and hits the record for receiving such a high number of likes within the first hour.

Even though most of us hate to admit it, that’s pretty much everyone’s social media dream. Social Media continues to fascinate me more and more everyday.

Virat Kohli’s birthday becomes a trending hashtag however what gets unnoticed is that he is working hard on his cricket since childhood. Numbers matter. When you talk about power of influence and you see people doubting it when you talk about social networks and you hear that it’s all an exaggeration. Are these people seeing what happened to the opening of Jennifer Aniston’s page. 5 hours and 16 minutes breaking the record of the page that grew faster and that faster reached 1 million !!! Took instagram below. And today it’s already 14 million. More than the Portuguese population!

Question of the day: Are you satisfied with your inputs of putting in the numbers of hard work? It might take a superstar like Jennifer Aniston to break the internet, but you don’t need 15 million followers for someone to hack your system. Jennifer Aniston broke her forced virtual silence by officially inaugurating her Instagram profile with a photo that sent the network into meltdown.