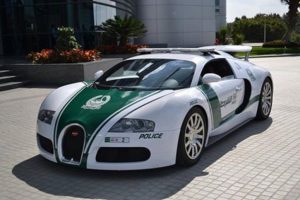 You would not believe this If there’s any police squad that’s wealthy, classy and super-awesome, it has to be Dubai Police. Yes this has been proved and now its official that Dubai Police add another Buggati Veyron to it. Buggati can go from 0-60mhp in just two and a half seconds and is claiming to be the world’s fastest cop car. It has been continously adding latest edition of cars from 2013 to help to improve the credibility and public image of the police force. And by adding this latest one it can touch a whopping 253mph (400 kmph), while Indian cop cars, Innova stagger around a lowly 150 kmph. The Dubai Police’s supercar beats the US police patrol, a Lamborghini which merely has a maximum speed of 360 kmph. Any country who would like to beat Dubai in its game will have to employ in its police fleet a Bugatti Chiron or a Hennessey Venom GT, which is certified the fastest road car in the world. The second fastest german car is Lamborghini Gallardo LP560-4, which is owned by the Italian force. As per the reports Dubai police authority are planning to go next level by buying eco-friendly cars in future and already in planning to expand its fleet of electric and hybrid cars by 2030. 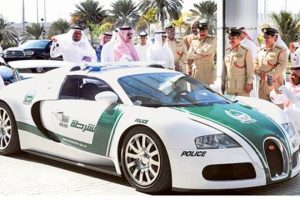 Dubai has had a habit of going big on whatever it does, from building the world’s tallest building to creating monster artificial islands. The city now has another record in its name – world’s fastest police car. It has been officially declared by the Guinness Book of World Records. Bugatti Veyron, which shoots upto 97 kmph in blazing 2.5 seconds and the top speed is 407 kmph, thanks to a 16-cylinder engine that produces a massive 1,000 horsepower. The Veyron is priced at Rs 10.5 crore, and only 14 of these were built, one of which is part of Dubai Police’s car fleet. 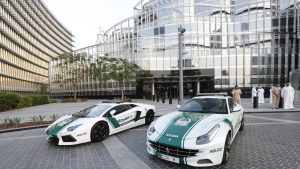 Bugatti Veyron is not the only high-speed car that the Dubai police has in its patrol. Dubai police’s ‘super fleet’ has 14 supercars. Here are few of them: McLaren MP4-12C, Lamborghini Aventador, Ferrari FF, Mercedes SLS AMG, Roush Mustang, Bentley Continental GT, Audi R8 V01 Plus, Nissan GTR and Mercedes SL36 AMG. Dubai has huge revenue generation from tourism, and the fancy cars are also a part of attracting more tourists’ attention. It’s not like Dubai was infested with thugs who got away in super cars and hence they had to bring in such faster cars for high speed chases!